Free delivery for orders in the UK

Launching Newport Pagnell’s 200-year anniversary of excellence in road transport, this bookazine (hybrid between a book and magazine) recalls the time when roads were clear and motoring was a carefree pleasure!

Where’s our Car? invites readers to join the hunt for a ‘lost’ car named the NP ( after Newport Pagnell). Apparently nearly 400 of them may have been made by the Salmons family in the 1920s – but no one can seem to find one.

Packed with clues, photos, tech spec and expert opinions, the light tourer is said to be worth a fortune and especially to the town which carries its name.

Comes with a slip-in supplement featuring a rare photo-brochure of the Tickford Street Works in 1924 including several images of the NP in course of production.

About the book: 52-pages A4 with colour sections and an atmospheric supplement

Note: Buy through this website and get FREE delivery  (UK mainland only)

WHERES OUR CAR - WHAT THEY ARE SAYING...

A comprehensive package and enjoyable read

The subject here is the missing NP motor car built by Salmons at the Tickford Street Works from 1923-25. The search has been on for a while now and this is the latest in the drive to find one of the 395 examples produced.  The publication comes in 2 parts, first a magazine on quality paper setting out the history of the car as known and then completed with a very special supplement, being a 1924 brochure replica based on the one existing copy previously owned by the late Margaret Salmons. This supplement is an amazing window back in time showing some important historic photos, from back in the day showing every aspect of car building.

I found this package a comprehensive and interesting read, which I would say includes every scrap of information thus unearthed so far.  The writer, in this instance going under the name Jack Reynolds, has covered every aspect including discrepancies like the engine makers (Meadows) only showing 99 units supplied for the builds, so could the search be on for a much reduced quantity?  All we know is there was no compromise on quality making the cars expensive in the market.  The end came in 1925, when it just happened that the company had their best original idea thus far of incorporating a winding handle mechanism to the open tourers, which at the end of the day was probably much more profitable.

An enjoyable read, one hopes that an example of this automobile will turn up at some point, and won’t that be a cause for celebration!!

Special  edition celebrating an English country town’s forthcoming 200-year contribution of design, manufacture and ingenuity to the British Transport Industry through everything from carts, carriages and coaches by the founding Salmons family to today’s luxury sports car phenomenon that is Aston Martin. Completely revised and updated with many new photos and illustrations,

plus news of the parent company’s Stock Market flotation, details of new ventures with Red Bull and Cranfield, and a re-making of the James Bond ‘Goldfinger’ car.

SALMONS & SONS & ASTON MARTIN - WHAT THEY ARE SAYING...

The remarkable record of ‘the little market town with a global reputation for excellence in road transport ‘ over the last 200 years, is topped off with this account of the Royal customers who have graced Aston Martin Lagonda cars with their custom. Believed to be the first time the relationship has been pieced together in a single volume;  also includes fascinating stories involving three generations of the Royals, plus a look at their links with the ‘movie royalty’ of Britain’s favourite secret agent James Bond.

What they are saying ….

‘A great little read … I enjoyed every bit of it and, as with everything that’s good, just wish there had been a bit more’ Shaun Skinner, Chair, Tickford OC

Perfect as a record of two centuries of outstanding local achievement in road transport design and manufacture from Victorian dog-carts to luxury sportscars fit for heroes at the remarkable Buckinghamshire market town of Newport Pagnell. As a gift or to mark a Special Occasion,  the FULL 3-edition SET includes text by experts,  extensive  illustrations, hard -wearing colour covers and is all enclosed in a handy presentation  binder.

Presentation Sets are being offered at the discounted price of £20 including an equivalent 15% discount off the new Crowning Glory publication and free home delivery (mainland UK only) for purchases on this website  www.wordgo.org.uk.

Comes with a map of historic Newport Pagnell FREE while stocks last.

Cromwell’s Garrison Town recalls the momentous Civil War of the 17th century, Newport Pagnell’s location was of great strategic importance on the Front Line between the opposing armies.

The controversial General always had an affinity for the place – fighting alongside its troops, sending his son to join the young conscripts, frequently visiting his friend the governor, and selecting it as the muster point for many in his army on the eve of the decisive Battle of Naseby.

Sorry, SOLD OUT
Read an extract

Bond in Bucks by Richard Meredith

Now it can be told… Ian Fleming, author of the mega-selling James Bond books spent much of his lifetime in Buckinghamshire… visiting the car-makers at Newport Pagnell, the Codebreakers at Bletchley Park, golfing with Jock Campbell of Milton Keynes and secretly training his commandos on a disused farm near Amersham.

A thousand years of history lies behind the rolling parkland of Newport Pagnell’s green ‘oasis’. From an ancient burial ground to Civil War defences, horse-race festivals, first-class cricket, an Observation Post in WWII and a railway train that never arrived. 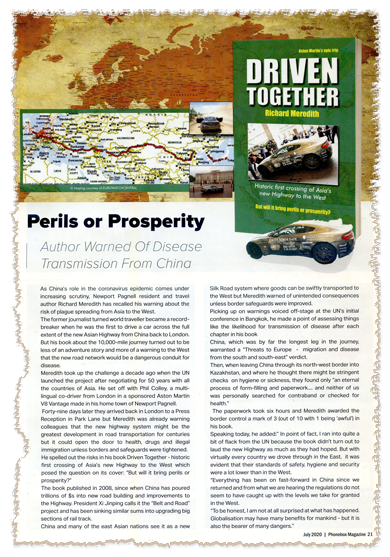 – Historic first crossing of Asia’s New Highway to the West

Local adventure traveller and charity fund-raiser Richard Meredith recounts his  epic journey in an Aston Martin across the so-called new Silk Road which China’s President Xi has financed with $billions. The  true-life escapade – a first for Britain – and  worthy of James Bond himself,  trailblazed a route across  10,000-miles from Tokyo to Istanbul (and then onto London), took 49 days and crossed 17 nations.

Yet this is so much more than an adventure story. The Asia Highway, still little-known  in the West, is one of the most important developments in road transportation for centuries. But while its purpose is to increase trade and eradicate poverty, there are serious warnings of modern-day hazards ahead and Meredith can claim to be one of the first to warn of  ‘unintended consequences’ from this new  conduit for the spread of disease like Covid-19 and a fast-track  for gangs in the drugs and sex trade, people traffickers and illegal migrants.

Invited by the UN to be the first to drive the new Highway Network, Meredith set out in 2007 with a brief to raise money for UNICEF, the children’s charity,  and prove the endurance of an Aston Martin. He completed both those tasks with notable success but finished up issuing a warning to the West that came so terribly true when a deadly unknown virus spread from Wuhan, China,  little more than a dozen years later.

With 32 pages of photographs

DRIVEN TOGETHER - WHAT THEY ARE SAYING...

A journey into the future that exposed profound implications for us all – Stuart Doughty OBE, veteran UK civil engineering Contractor

Fantastic account of amazing journey …especially interested in road relating superhighway to a pandemic … history repeats itself: Those who forget it are condemned to repeat it! – Kevin Hall, Aston owner, Bucks